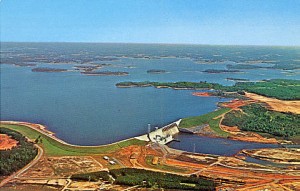 Just 18 miles north of Charlotte, North Carolina, a beautiful river drains from the Appalachian Mountains and flows into what is sometimes referred to as the “inland sea” of North Carolina. Lake Norman, the largest artificial freshwater lake in North Carolina, was constructed by Duke Energy as part of a power generation project consisting of Cowan’s Ford power station dam, the coal burns coal-burning electric generator at Marshall Steam, and the William B. McGuire Nuclear Station. The Catawba River flows through the Cowan’s Ford Dam, which consists of more than one mile of earthen and over 1200 feet of a concrete dam, and drains towards the south into Mountain Island Lake. These are just a few of the many interesting Lake Norman facts that make this lake unique. 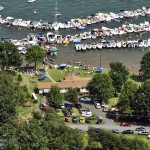 Among other Lake Norman facts, it was completed in 1964,  covers over 32,000 acres when full, and is over 33 miles long and 9 miles wide. The lake’s name was derived from the former Duke Power President, Norman Cocke. The power generated at the three power stations on the lake feeds the entire Piedmont region of North Carolina. In addition, the cities of Charlotte and Mooresville, as well as surrounding counties, rely on Lake Norman for their water supply. With a shoreline length of approximately 520 miles, a surface area of over 50 square miles, and an average depth of over 33 feet, plenty of recreational activity is available in addition to this beautiful lake’s power generation and water supply capability. The lake is home to Lake Norman State Park, built by the state of North Carolina and Duke Power in partnership. Ten public access points on the lake, provided by Duke Power, offer easy access for boaters to egress the water. Lake Norman is regularly stocked with striped, largemouth, crappie, catfish, spotted, and bream. Other interesting Lake Norman facts include the International Jet Sport Boats Association tour stops there annually, and the South Atlantic Yacht Racing Association conducts numerous sailboat races South Atlantic Yacht Racing Association runs multiple sailboat races during the year.

Another benefit provided by the construction of Lake Norman is flood control. The devastating Catawba River flood of 1916 caused extensive damage in Mecklenburg County. An estimated 80 people perished, suggesting that the flood caused over $20,000,000 in property damage. Lake Norman has an incredible capacity of almost 3.5 trillion gallons of water and endured the torrential rains of 1970 without overflowing.

Lake Norman is an artificial wonder that supplies water, power, safety, and fun!

Posted in: About the Area
Tags: about the area, attractions, Facts, Things to do

This site uses Akismet to reduce spam. Learn how your comment data is processed.